although we spent most of the day shooting the newest Scary Bear film on the beach, in the evening rob and i decided to have a romantic night in Charlottetown, doing our favourite activity, dinner and a show. we had dinner at Sims Corner Steakhouse and Oysterbar, where rob and i managed to drop almost the same amount of money as we did in Quebec City. the place was expensive but delicious. Rob likes to play food critic when we travel. he was pretty impressed with what we were served, although my chicken cordon bleu was technically not a chicken cordon bleu, since they replaced my ham with bacon....but who complains about accidental bacon? 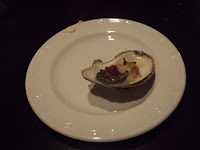 i ordered ONE oyster, just to have a taste. i don't normally eat oysters, but this one was doused in cream and bacon, so how could i say no to that? 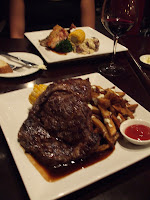 that's a lot of meat. rob ordered the steak, which was beef raised locally on the Island.

afterwards we went to Baba's Lounge to see a couple of bands playing, including Toronto's Andy Swan, and local bands Racoon Bandit and the Drea McDonald Band. It was a cute venue, a small attic nestled on top of a restaurant right on University. i enjoyed the music, although i wish everything started up a bit earlier - the music didn't begin until 11PM and the main act didn't come on until after midnight. but it was a Friday night - maybe Islanders party later. it's not like i don't get ten hours of sleep a night plus a daily siesta.

the dead seal is still lying on the beach...
Posted by rungloriarun at 8:08 AM

rungloriarun
reflections on culture as experienced by me, Gloria. Any views expressed on this blog do not necessarily reflect the views of any of my employers, or anyone else. Avatar by William Bradford

Other links to check out